New music in the MMMM below = Tyler T., Tennis, The Still Tide, and Foxfeather.  Don’t forget to rate each one from 1 (worst) to 5 (best).  Last week you crushed the polls. 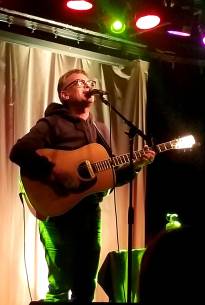 When was the last time you got to see a Denver TV news anchor strap on a guitar and play to a nearly sold out room? Friday night, Channel 7’s Shannon Ogden graced the Walnut Room, with some 90 (est.) friends in attendance.  Shannon is an accomplished singer-songwriter, who also happens to enjoy performing music from Grace Potter, whose songs he opened and closed the set with.  Shannon has been in Denver now three years, after spending several years in Jacksonville Florida, where he performed on a regular basis.

Boulder’s Paul Kimbiris opened the night with a forty five minute that included new music.  Paul’s got a new EP coming out in April with a tour scheduled supporting Amy Speace from Nashville. Paul’s songs “…have appeared on several major network TV shows such the Emmy award winning cop drama “The Shield”, “Gang Related” on FOX, the ABC drama “Forever”, and most recently USA networks “Queen of the South.”

Big thanks to Shannon for ending the show just after 10PM for us “older” folk — and big ups to Channel 7 sports director Lionel Bienvenu for sitting right up front with his wife, enjoying his friend’s show.

Saturday night we hit the Mercury Cafe to check out one of Denver’s newest neo-soul projects, Last Nerve.  I’d been looking forward to this experience for nearly a decade, since the first time I heard Merrian “MJ” Johnson perform with her mother Erica Brown, and Colorado blues legend Dan Treanor.  Despite it being a debut appearance, the nearly packed out room was there to encourage her and the well rehearsed five piece backing her up.  The band grooved straight off downbeat and never let down during the one set we stayed for … an after 10PM start time was a bit rough … especially the next morning.

You make a big difference in what gets played on the show.  Every week I share some or all of the new music … (D) (N) … played on the show with you here.  You rating gets factored into my decision in what to maintain in the show’s “for airplay” library.

David Starr owns Starr’s Guitars in Cedaridge Colorado.  He happens to be friends with part time Colorado resident and musician John Oates.  John has worked with several Colorado acts over the years, including the John Oates Trio, Paper Bird and others.  They asked Americana music legend Jim Lauderdale to join the fun on David’s newest video.