I got really lucky this past week.  I got enough time off that I was able to go out and sit in an audience.  Or two.  Or three …. or four?!

Mrs Goat and I managed to take in the CSO “Turn Over the Keys” on Thursday night, while Friday night was Jaden Carlson at Oskar Blues in Lyons, Saturday evening was the grand opening celebration at Might Fine Production and recording studio .. and Sunday we got in a little bit of Pete Kartsounes with Michael Kirkpatrick (Telluride Troubadour of the Year Winner 2014). at Homemade Liquids and Solids in Longmont.

pics from the CSO show and from MFP. 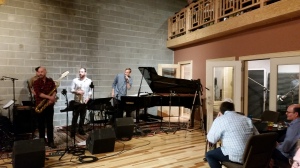