I got the best news of the summer recently, when my friends at 105.5 The Colorado Sound let me know just how popular the Colorado Playlist is in Denver on Sundays.  WOW… It’s not a far off dream to imagine making it into the TOP 10 for the hours the show is on the air in the Denver metro! (if i even dared dream of top 5 i’d be afraid of squashing the whole thing lol).

I’m also stoked as hell to now be on the air every Saturday morning from 6AM-NOON on 105.5 … “the fastest growing noncom in the nation.”  You won’t get a lot of Colorado stuff on this shift – this is all about music discovery – local and national and international.

New music in this week’s Monday Morning Music Meeting from Edison, Safe Boating is No Accident and the Patti Fiasco … see below.

The Mishawaka Amphitheatre will add to its ongoing 100th anniversary activities by hosting a party and public ceremony on August 21. The festivities will include the ceremonial reveal of a commemorative display that will find a fixed home in the venue’s dance hall. Community-sourced and curated items that honor the historic venue’s past will be shared with the public, creating the foundation for an ongoing exhibit that continues to tell the story of The Mish.

Fans and friends of The Mish are invited to the open house, which will take place from 11 a.m. – 1 p.m. on August 21, and will feature the exhibit unveiling and a live music ensemble performance via Classic Revolution Northern Colorado. Beverages and snacks will be provided.

The public is invited to contribute to the Mishawaka Amphitheatre display; those with artifacts or memorabilia to share are encouraged to contact info@themishawaka.com.

The 10th Anniversary of the Colorado Playlist is coming up August 7th at the historic Mishawaka Amphitheater – presenting the Railbenders, GOATZ! and the Liz Barnez Band.  All Ages.  Tickets $15 / $17.50 DoS  SUPER EXCITED!  We’re planning on recording the event for a future episode of The Colorado Playlist.  DON’T FORGET => The “Mish” is a shuttle venue.  Parking is extremely limited and is $40 a car.   HIGHLY RECOMMENDED that you buy tickets and parking/shuttle passes online.

I’ve known Ryan Chrys and members of the Rough Cuts for several years now … Ryan to his days in SPIV and Demon Funkies.  Always great friends and a blast to be around.  Here’s there newest …

Support for Chris K’s Colorado Playlist comes courtesy of The Historic Mishawaka Amphitheatre — Celebrating 100 yrs of music and dancing in the Poudre Canyon.

As much as I would hope that support comes easily it does not – anymore so than for anyone else in music.  I am deeply thankful to the Mishawaka Amphitheater for sponsoring this program – and to you for dropping a few bucks in the tip jar on occasion.  Thank you.  FUND ME.

If you’re a Colorado business engaged in music, music related activities, hemp, or other earth friendly products message me for information about how you can support this program.

What you’ll find below are new songs on the show this week … listen to them again (or for the first time) and let me know which ones you think I should keep in the Colorado Playlist.

I conceived of this idea as a way for you to discover some of the new music I played on the show, and to give you the chance to let me know which of the tracks you like, and think I should keep in rotation.  I get a lot of feedback from fans about what’s liked .. and what isn’t.

NOTE:  In order to be included in the MMMM poll, the band/artist must have an embeddable file available on SoundCloud, BandCamp (my favorite), Reverbnation or YouTube. 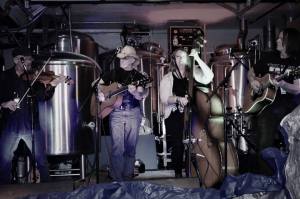 Get your tix now for the Colorado Playlist 10th Anniversary Party at the Mishawaka on Sunday Aug 7.

Saturday Aug 13, GOATZ! makes their first appearance at the 2016 Bohemian Nights at New West Fest on the Old Town Square stage at 1:20PM for 35 minutes.

I've been on the air in Northern Colorado since 1978. The Colorado Playlist is broadcast on 30 FM frequencies in the state. I am also a musician, talent buyer and business consultant. Email me at coloradoplaylist@gmail.com View all posts by goat